To rehash some of the Social Security claiming ages, please note the following inflection points:

In contrast to claiming early, one may also choose to claim later.  For those born after 1943 – likely most readers – your benefit is increased by 8% per year.  Every month adds 2/3 of a percent to your benefit.  Thus, delaying your initial claim from age 67 to age 70 increases your benefit by 24% (2/3 * 36).

Another wrinkle in the Social Security maze deals with suspending your Social Security payments once you have made your initial claim.  The Social Security rules dictate that once you make your initial claim, you can undo the claim for only a very short period of time afterwards.  Then, you are stuck with your reduced benefit until at least your Full Retirement Age.  However, at your Full Retirement Age, another option becomes available.  Specifically, you may voluntarily choose to suspend your Social Security payments.  After doing so, you will earn delayed credits at the 2/3 of 1 percent per month until either Age 70 or whenever you choose to re-claim your benefits before you blow out the 70th candle.

In my view, this is a claiming strategy worth considering for the following reasons:

Every individual Social Security Claiming decision is unique – no retirement account balances are identical, lifespan obviously varies, and income needs cover the landscape.  However, there are some general considerations:

Whatever the case, it is important to know the basic Social Security payout math.   Social Security is designed to payout the same amount over your life expectancy regardless of when you claim.  Differently said, regardless of your Claiming Age, which is anywhere between 62 and 70 for everyone, your Social Security benefits are intended to be roughly the same.  Meaning, if you defer, you should expect larger payments.  Conversely, if you claim early, your payments are smaller.  Here is a table to illustrate this point: 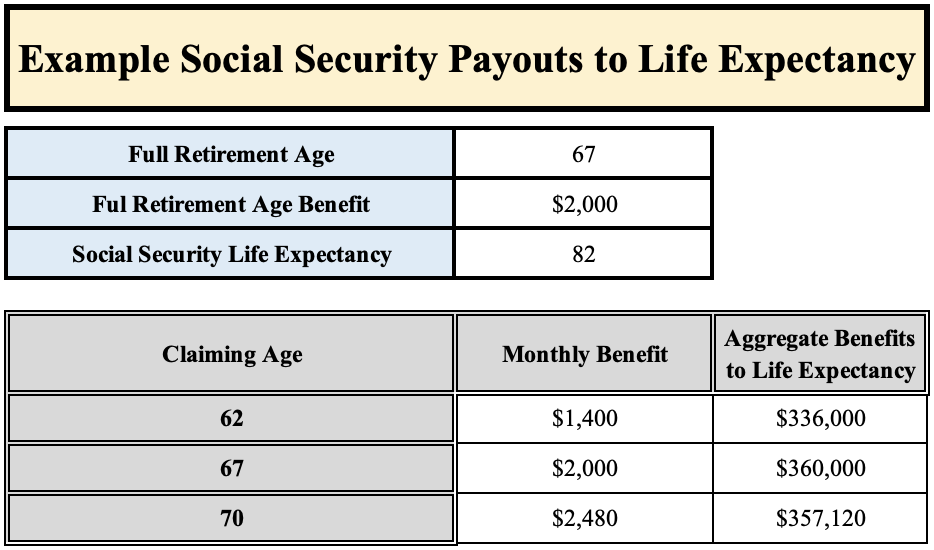 As you can see, the amount of Social Security payouts is roughly the same for Claiming at Full Retirement Age or Age 70….the penalty for claiming early is indeed onerous.  Another relevant point is the following:  you really win big with Social Security when you outlive the Social Security Life Expectancy on which your payment is based.  Here are the numbers:

While the difference between a Full Retirement Age claim and an Age 70 is somewhat debatable, I’d recommend a wary eye on Age 62 claims - in this example, that could be a $190,000 mistake.  Therefore, if you have claimed early and the choice proved unwise, suspending your benefit could prove beneficial.  Here is an example of what a correction could do:

While the benefits from suspending may not seem eye-watering.  However, please note, the annual benefit increase at Age 70 is over $4,000 per year ($1,736 compared to $1,400), which, to most, is a meaningful amount.  And recall, the most likely candidates for this strategy are those who either return to work, have significant pension income, or have larger Tax-Deferred Assets.   Therefore, suspending would likely be coupled with other value-enhancing strategies such as Roth Conversions, larger withdrawals from your Tax-Deferred Assets, Roth IRA Contributions, or all of the above.  The net of the financial planning could result in smaller future RMDs, more Tax-Free Assets, and perhaps a higher Social Security monthly benefit, of which a greater share could be income tax free.

And another subtle point, on the heels of very generous stock market returns since 2009, realizing gains via Tax-Deferred Retirement Account distribution to bolster your Social Security benefit might be an exceptionally rational strategy for some.  Indeed, the increases in your Social Security benefit are guaranteed by law when you suspend.  Stock Market gains, conversely, while potentially higher, are only probable.

Social Security – for better or worse – is a major source of income for most Retired Americans.  The program is laden with rules and regulations and undoing any choice is challenging.  Therefore, every potential claimant should have a cogent entrance strategy to claiming.  However, if circumstances change, which is as inevitable as taxes, opportunities abound to optimize your Social Security benefits at your Full Retirement Age.  Admittedly, the net of all these numbers to you might be "this is all too confusing".  Simply put, it is confusing.  Therefore, seeking the advice of a financial professional may be a wise decision for you.

If you have concerns about your current Social Security situation, I’d love to meet you, get to know you, and hear about your goals, your concerns, and then review your Social Security options with you. Schedule a 30-minute introductory meeting or contact us at chris@resilientam.com or (901) 318-3423 to get started!

Christopher Flis is founder and financial planner at Resilient Asset Management, a fee-only Registered Investment Advisor (RIA) based in Tennessee. Chris graduated from the United States Naval Academy with a bachelor’s degree in computer science, earned a Master of Science in Computer Science from the University of Minnesota, and attended flight school in Pensacola, FL, launching a fulfilling and distinguished military career. Chris spent 20 years in the Navy as an F/A-18 Strike Fighter Pilot, which included tours in Japan, Australia, and California, combat missions in all areas of the Persian Gulf and Afghanistan, and time spent as the Executive Officer of Naval Base Guam and Director of Navy Casualty in Millington, TN. When Christopher was ready to make a career change, he turned to a passion he held since high school when he attended a lecture on personal finance and started managing his own investments. He earned his Certified Financial PlannerTM (CFP®) designation and now combines his passions and experience by serving military, retired military, business owners, and retirees. Chris provides comprehensive, customized financial services, helping his clients overcome their challenges and take opportunities so they can achieve financial independence.

Chris lives in Downtown Memphis with his wife, Christine, and his son, Emerson. He is an avid runner and when he is not jogging for exercise, he is usually chasing his son around or walking his 3 dogs. To learn more about Chris, connect with him on LinkedIn.